The Dart Language: When Java and C# Aren’t Sharp Enough

Way back in 2013, Dart’s official 1.0 release got some press—as with most Google offerings—but not everyone was as eager as Google’s internal teams to create business-critical apps with the Dart language. With its well-thought-out rebuild of Dart 2 five years later, Google seemed to have proven its commitment to the language. Indeed, today it continues to gain traction among developers—especially Java and C# veterans.

The Dart programming language is important for a few reasons:

Those of us from the C# or Java world of larger enterprise systems already know why type safety, compile-time errors, and linters are important. Many of us are hesitant to adopt a “scripty” language for fear of losing all the structure, speed, accuracy, and debugability that we are used to.

But with Dart development, we don’t have to give up any of that. We can write a mobile app, web client, and back end in the same language—and get all the things we still love about Java and C#!

To that end, let’s walk through some key Dart language examples that would be new to a C# or Java developer, which we’ll sum up in a Dart language PDF at the end.

Note: This article only covers Dart 2.x. Version 1.x wasn’t “fully cooked” – in particular, the type system was advisory (like TypeScript) instead of required (like C# or Java).

First, we will get into one of the most significant differences: how code files are organized and referenced.

In C#, a collection of classes is compiled to an assembly. Each class has a namespace, and often namespaces reflect the organization of source code in the file system—but in the end, the assembly does not retain any information about the source code file location.

In Java, source files are part of a package and the namespaces usually conform to the file system location, but in the end, a package is just a collection of classes.

So both languages have a way to keep the source code somewhat independent of the file system.

By contrast, in the Dart language, each source file must import everything that it refers to, including your other source files and third-party packages. There are no namespaces in the same way, and you often refer to files via their file system location. Variables and functions can be top-level, not just classes. In these ways, Dart is more script-like.

So you will need to change your thinking from “a collection of classes” to something more like “a sequence of included code files.”

Everything you refer to in a source file has to be declared or imported within that file, as there is no “project” level and no other way to include other source elements in the scope.

The only use of namespaces in Dart is to give imports a name, and that affects how you refer to the imported code from that file.

The examples above organize code without packages. In order to use packages, code gets organized in a more specific way. Here’s an example package layout for a package named apples:

Then you can import whole packages instead of individual files:

Nontrivial applications should always be organized as packages. This alleviates a lot of having to repeat file system paths in each referring file; plus, they run faster. It also makes it easy to share your package on pub.dev, where other developers can very easily grab it for their own use. Packages used by your app will cause source code to be copied to your file system, so you can debug as deep into those packages as you wish.

There are major differences in Dart’s type system to be aware of, regarding nulls, numeric types, collections, and dynamic types.

Coming from C# or Java, we are used to primitive or value types as distinct from reference or objecttypes. Value types are, in practice, allocated on the stack or in registers, and copies of the value are sent as function parameters. Reference types are instead allocated on the heap, and only pointers to the object are sent as function parameters. Since value types always occupy memory, a value-typed variable cannot be null, and all value-type members must have initialized values.

Dart eliminates that distinction because everything is an object; all types ultimately derive from the type Object. So, this is legal:

In fact, all primitives are implicitly initialized to null. This means you cannot assume that default values of integers are zero as you are used to in C# or Java, and you might need to add null checks.

Interestingly, even Null is a type, and the word null refers to an instance of Null:

Not As Many Numeric Types

Unlike the familiar assortment of integer types from 8 to 64 bits with signed and unsigned flavors, Dart’s main integer type is just int, a 64-bit value. (There’s also BigInt for very large numbers.)

Since there is no byte array as part of the language syntax, binary file contents can be processed as lists of integers, i.e. List<Int>.

If you’re thinking this must be terribly inefficient, the designers thought of that already. In practice, there are different internal representations depending on the actual integer value used at runtime. The runtime does not allocate heap memory for the int object if it can optimize that away and use a CPU register in unboxed mode. Also, the library byte_data offers UInt8List and some other optimized representations.

Collections and generics are a lot like what we are used to. The main thing to note is that there are no fixed-size arrays: Just use the List data type wherever you would use an array.

Also, there is syntactic support for initializing three of the collection types:

In dynamic languages like JavaScript, Ruby, and Python, you can reference members even if they don’t exist. Here’s a JavaScript example:

If you run this, person.age will be undefined, but it runs anyway.

Likewise, you can change the type of a variable in JavaScript:

By contrast, in Java, you cannot write code like the above because the compiler needs to know the type, and it checks that all operations are legal—even if you use the var keyword:

Java only allows you to code with static types. (You can use introspection to do some dynamic behavior, but it’s not directly part of the syntax.) JavaScript and some other purely dynamic languages only allow you to code with dynamic types.

The Dart language allows both:

Dart has the pseudo-type dynamic which causes all the type logic to be handled at runtime. The attempt to call a.foo() will not bother the static analyzer and the code will run, but it will fail at runtime because there is no such method.

C# was originally like Java, and later added dynamic support, so Dart and C# are about the same in this regard.

The function syntax in Dart is a little lighter and more fun than in C# or Java. The syntax is any of these:

Since everything is an object, including primitives like int and String, parameter passing might be confusing. While there is no ref parameter passing like in C#, everything is passed by reference, and the function cannot change the caller’s reference. Since objects are not cloned when passed to functions, a function may change properties of the object. However, that distinction for primitives like int and String is effectively moot since those types are immutable.

If you’re in the C# or Java worlds, you’ve probably cursed at situations with confusingly overloaded methods like these:

Or with C# optional parameters, there is another kind of confusion:

C# does not require naming optional arguments at call sites, so refactoring methods with optional parameters can be dangerous. If some call sites happen to be legal after the refactor, the compiler won’t catch them.

Dart has a safer and very flexible way. First of all, overloaded methods are not supported. Instead, there are two ways to handle optional parameters:

You cannot use both styles in the same function declaration.

C# has a confusing position for its async keyword:

In the Dart language, async is in a more logical place, denoting the implementation is asynchronous:

Like C# and Java, Dart is lexically scoped. This means a variable declared in a block goes out of scope at the end of the block. So Dart handles closures the same way.

Java popularized the property get/set pattern but the language does not have any special syntax for it:

C# has syntax for it:

Dart constructors have quite a bit more flexibility than in C# or Java. One nice feature is the ability to name different constructors in the same class:

You can call a default constructor with just the class name: var c = Client();

There are two kinds of shorthand for initializing instance members prior to the constructor body being called:

Constructors that call other constructors in the same class in Java and C# can get confusing when they both have implementations. In Dart, the limitation that redirecting constructors cannot have a body forces the programmer to make the layers of constructors clearer.

There’s also a factory keyword that allows a function to be used like a constructor, but the implementation is just a regular function. You can use it to return a cached instance or an instance of a derived type:

In Java and C#, we have access modifiers like private, protected, and public. In Dart, this is drastically simplified: If the member name starts with an underscore, it’s visible everywhere inside the package (including from other classes) and hidden from outside callers; otherwise, it is visible from everywhere. There are no keywords like private to signify visibility.

Another kind of modifier controls changeability: The keywords final and const are for that purpose, but they mean different things:

The Dart language supports interfaces, classes, and a kind of multiple inheritance. However, there is no interface keyword; instead, all classes are also interfaces, so you can define an abstractclass and then implement it:

Multiple inheritance is done with a main lineage using the extends keyword, and other classes using the with keyword:

In this declaration, the Employee class derives from Person and Salaried, but Person is the main superclass and Salaried is the mixin (the secondary superclass).

There are some fun and useful Dart operators that we are not used to.

Cascades allow you to use a chaining pattern on anything:

The spread operator allows a collection to be treated as a list of its elements in an initializer:

Dart has no threads, which allows it to transpile to JavaScript. It has “isolates” instead, which are more like separate processes, in the sense that they cannot share memory. Since multi-threaded programming is so error-prone, this safety is seen as one of Dart’s advantages. To communicate between isolates, you need to stream data between them; the received objects are copied into the receiving isolate’s memory space.

Develop with the Dart Language: You Can Do This!

If you are a C# or Java developer, what you already know will help you learn the Dart language quickly, since it was designed to be familiar. To that end, we’ve put together a Dart cheat sheet PDF for your reference, specifically focusing on important differences from C# and Java equivalents: 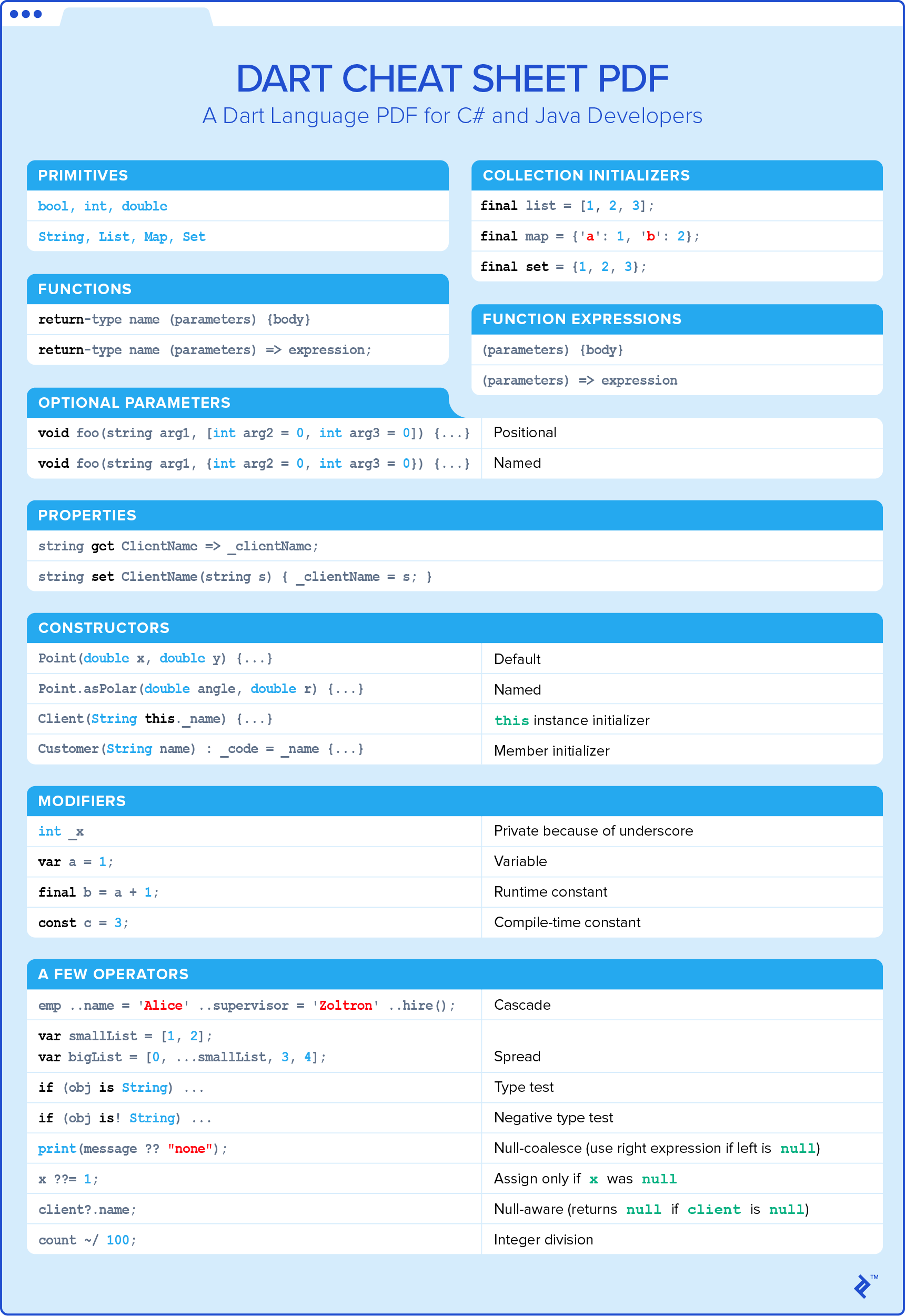 The differences shown in this article combined with your existing knowledge will help you become productive within your first day or two of Dart. Happy coding!